I can’t believe that it’s already the end of March. This month and even the year seem to be flying by and as I reflect, I’m proud to relish in the reality that I haven’t wasted this first quarter of the year. This time last year, I was so obsessed with buying a house that I could barely focus on anything else and in turn, I wasted the first 3 quarters of the year. My mind was worried and occupied with where we were going to end up and how; only to find ourselves in a two bedroom apartment in south Atlanta about to have a baby, paying no rent and living on one part-time salary. It sounds so crazy but I also can’t imagine us living in a house that we wouldn’t have been able to afford even though it was something that I desperately wanted. Something I thought was for us. And after nearly 9 months of “no”, we finally had to take a step back from our efforts and regroup. I had to admit that I just wanted a home; and X had to admit that he only wanted it because I was so adamant about it. He  just wanted me to be happy but that desire became a distraction and then an obsession. Before I knew it, it was the only thing I cared about. In my spare time and even in my busy time, I would be online looking or our new home. Not knowing that I was not only wasting my time, but causing friction and discontent in my own home.  This desire that I had, messed with my mind and I even had given  it the power to make me unhappy.

And here I am, march 2015, finally realizing that the plan I had for us, wasn’t even going to correlate with my true desires. There is no way that I could have left my job and pursued my dreams if we would have bought a house last year. We probably wouldn’t have been able to afford a new car and we would both be stressed. We had to recognize God’s no and choose to come together as we were separate in our desires as well as our reasons for them. The day that we came together and decided to leave the house alone, was the same day that we were presented with a great job, housing and ministry opportunity. We had to close our minds to our own plans and open our hearts to a true reality. As a married couple, we had to come back together. We were unintentionally divided in our desires which made for a tense 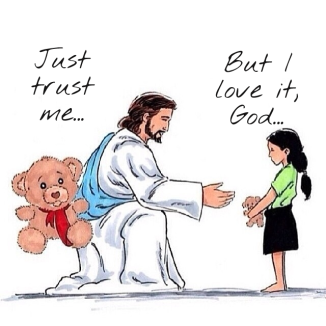 atmosphere in our home. Even now, I’m learning to heed to the “no’s”. It’s so easy for me to get wrapped up in what I want that I pursue it to insanity and the detriment of  my marriage. I’m not saying that I should neglect my dreams, but if I could be honest, there are certain superficial desires that I obsess over and my obsession causes me to lose sight of true foundation and what matters.

I believe God brought this to my remembrance because I was almost headed in the direction of obsession once again. We often chase what we don’t need simply because we desire it. It’s almost as insane as a person that is trying to make pancakes and searching for a waffle maker. The Bible says that we only know and see in part, and because of that, we focus on the wrong things and lead ourselves down a dead end path, wasting precious time.

In 2014, I wasted almost an entire year chasing something that God had said no to. It had become my everything and as the end of the year approached, I began to feel sick about the fact that I didn’t have much to show for 2014. I realized that the house had become a distraction and because I was so focused on it, I had no idea what other things I was supposed to accomplish.  Now, as I had begun to obsess over something completely new, I am reminded that I can’t do that again. I have to understand and recognize the signs when it’s clear that it may not be time for that specific desire; no matter how bad I want it. When God says no, stop saying yes to your desires and say yes to Him. Listen to His voice, and trust that He always wants the best for you. What He says yes to will be so much better than what He is saying no to. It’s difficult, but you just have to trust it. Don’t waste 9 months chasing a reality that isn’t for you. Make the decision to surrender your desires so that God can give you what you truly need.

View all posts by Ifie Natasha

One thought on “When God says no…”