I’m sick and tired of people telling me that I have a good man. Every time he smiles at me or serves me. Every time he opens my door or calls me sweetie the world around me erupts in cheer and accolades as if I’ve just won the golden ticket to the chocolate factory.

People are sure to remind me that I’m blessed and lucky to have such a good husband. He loves me, is easy-going, and respects me blah blah blah. Which is true. He’s amazing. But one thing that I just keep thinking is that every woman has the opportunity to have that. And please wait before you jump on me and slap the “there are no good men left” stigma in my face. I meet women that complain about their men or compare theirs to mine and it’s increasingly frustrating. If anyone knows my story, they know that I am one of the LEAST deserving of a good man yet I have one. Because I chose to have one. You can’t choose to settle for what’s in front of you simply because you really want to be wedded and then get upset that you don’t have a “good” man. My mom brags on my husband all the time, which I’m grateful for. But just like any other human, he has his flaws. Flaws that irritate the hell out of me sometimes. And I’m ok with those flaws. I can live with them. He doesn’t disrespect me or treat me any less than a queen. He helps with the baby and around the house when I need him to. He’s also insanely nonchalant about planning and leaves it to me to do 90% of the thinking for our household. He could stay inside and watch superhero movies all day and when he cooks, he leaves it all in the kitchen to soak….for days. And while these things drive me crazy, they are things I’m willing to live with because he’s 100% amazing; flaws and all.
You have the ability to choose what your deal breakers are. And if for some reason, you decided that everything is a deal breaker,than you choose to wait until that man comes that will fulfill all of the requirements on your list. On the other hand, if nothing is a deal breaker, than you have chosen to settle with a man who has no accountability or standards to reach. Then there are those of us that are in the middle, patiently waiting for a man who will meet our standards while also being willing to compromise. It’s often easy to waver in that place. It’s easy to decide to settle on the non negotiable’s just so that you won’t be alone anymore. However, choosing to settle is also choosing to accept a life with someone who may or may not leave you feeling miserable in a few months, or years.
One Sunday, X (short for Xavier,who is my husband) and I were preparing to leave for church. I was standing about 20 feet away from where we parked. X got in the car, backed out and backed up to where I was standing. A friend of ours made a comment about him being ahead of his time because had it been him, he would have just waited for me to walk to the car. In that moment I was proud to have a man who did a simple thing like drive to pick me up; even if it was just 20 ft. In college, I had the epiphany that one of the reasons why men get the pass to cheat, be lazy, relinquish all responsibilities to women etc, is because we give them the “OK”. We say “well he’s a man, so he’s going to do….” While I was pregnant, a friend told me that my husband wouldn’t wake up with the baby because that was my job. The hell? Did he not make the baby with me? Matter fact, he’s the reason the baby was created. Why would it just be MY responsibility to take care of her?? People say I’m lucky because he helps me. No. I’m not lucky because he helps me. I chose a man that loves me and has a good heart. A man that wants to be involved with his family. A man that wants to be a good father and a good example to his family and children.
Sometimes us women have the habit of choosing men we think we want and then we compare. Or we get upset that our man isn’t doing xyz. You chose him! No matter the circumstance, you made a choice to be with him. Granted, I understand there are cultures where marriages are fixed, and circumstances where you choose to be with a man for various financial and security reasons. But (and this may sound harsh) you made a choice and you can’t blame others for it.
Most us of us have had the ability to choose the hardworking, caring man that has a God fearing love within him. But we don’t choose those guys. Hell, I almost didn’t choose mine. Sometimes they don’t come with the shiny new job. Or the “cool factor”. Sometimes they aren’t the bad boys. Sometimes they are the virgins. The ones we reject because we don’t like their style. The list can go on forever. Either way. We make choices. And those choices determine what life looks like.
So. Stop telling me I’m lucky to have a good man. I’m blessed that he found me and I’m glad that I chose him. 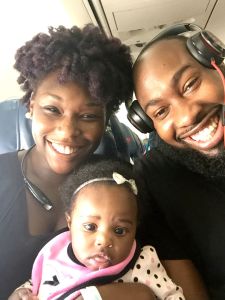 View all posts by Ifie Natasha